The Virtual Athletics League (VAL) is launching a worldwide “Pistol Whip” VR tournament with support from Oculus and iBUYPOWER, in association with VRespawn, SpringboardVR, LIV, VRML and Splitverse.

According to Jo Dunlop, head of business development and marketing from Cloudhead games “Cloudhead is ecstatic to see ‘Pistol Whip’ enter VR esports with its first Virtual Athletic League tournament. We look forward to watching the variety of playstyles ‘Pistol Whip’ encourages in the race to the top.”

Along with the high-score tournament VRespawn and VAL are running a global social media contest in mixed reality. The social contests will be powered by LIV. SpringboardVR is supporting and sponsoring efforts to involve their 500 VR arcade customers. Community leagues and media groups like VRML, VRespawn and Splitverse are bringing players, media and passion for VR eSports as well as logistical support, while iBUYPOWER is providing the gaming platforms with their VR Ready PCs.

The competition is scheduled to run in three sections, over three weekends in March: an at-home, online section for everyone around the world on March 13-14, a global VR arcade section co-hosted by SpringboardVR from March 19-22, culminating in a grand finals in Salt Lake City on March 29. The grand finals will consist of the top three finalists who can qualify from either the home or arcade section. The top three will be flown out to VAL’s headquarters in Salt Lake City. 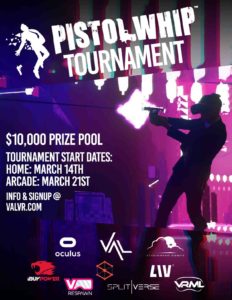 The $10,000 prize pool has contributions from Oculus, iBUYPOWER, Springboard and LIV. Competitors will be battling for the bragging rights of being the best “Pistol Whip” player in the world, a cut of $5,000, tech giveaways of the Rift S system from Oculus, swag and custom mixed reality avatars from Wolf3d, and other VIP packages.

The Virtual Athletics League has run many of the world’s largest VR esports events, holding both VR arcade-based tournaments, as well as online events. Additionally, VAL is teaming up with the experienced broadcast talent from VRespawn and VRML to stream the competition in mixed reality on Twitch, in addition to Facebook Gaming. This will bring audiences the intense pistol whip action on many platforms, as the competitors fight their way to the top of an all-out high-score battle.

The game has been designed from the ground up for VR competitions and highlights the best in the mixed reality format. This technology, pioneered by LIV, has brought mixed reality content to billions of viewers. In addition to the main action, influencers, creators and anyone who wants to get into mixed reality content creation can enter a social media contest that runs the month of March, with categories such as, “best dressed,” “best deadeye score” and “the Whip challenge.”

“VR spectatorship and esports is an area of passion for us at LIV,” sid LIV CEO Aj Shewki. “We’ve powered Mixed Reality for VAL, Oculus and Cloudhead Games in the past and are super excited to be a partner for this giant tournament. We expect killer moves to be on display!”

“This is the first large-scale event to bridge the home and arcade VR communities together around a top-rated game, and SpringboardVR is excited to support it,” said Michael Festa, chief business officer of SpringboardVR. “We have been dedicated to serving location-based virtual reality for the past three years and we’re thrilled to bring this kind of eSports event to our [customers] alongside VAL, Oculus and Cloudhead Games.”

The Virtual Athletics League takes the best elements of esports digital worlds and combines them with the real physicality and athleticism from traditional sports.

“Over the past two years of our history as a league, we have seen hundreds of VR arcades progress by developing their arcades into VR esports centers,” explained Ryan Burningham, the CEO and founder of the Virtual Athletics League. “We have always considered that home players and arcade players are part of an interconnected ecosystem that supports our core mission of VR eSports taking place anywhere. For instance, devices like the Oculus Quest have opened this new type of eSports to more players than ever before. This tournament is our largest yet, and we are deeply grateful to all those we are working with, here, to bring this VR eSports revolution to the world”.

According to Vivian Chazen Content Director and Partner at VRespawn, “We love the collaboration within the VR Sports community and we are excited to work with VAL to premiere the first-ever Pistol Whip tournament. The Hive team will be hosting the tournament virtually in a VR social app while our VRespawn team will be on location providing a top-tier event experience. Our goal is to engage players and the overall community with the spirit of competition with our signature VIP services.”