He explained that the platform will be optimized for the Qualcomm Snapdragon XR2 Platform – the world’s first 5G-supported XR platform. Snapdragon combines Qualcomm’s expertise in XR, 5G and AI to help usher in a new era of XR. The platform boasts multiple firsts for XR that can be scaled across AR (augmented reality), VR (virtual reality) and MR (mixed reality). 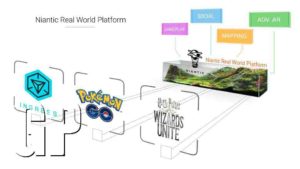 “At Niantic, we’re unlocking the potential to create next-generation AR experiences through the Niantic Real World Platform, and building new ways to map, share and understand reality,” said Keslin. “The Niantic Real-World Platform has been proven out by hundreds of millions of users, through consumer experiences such as ‘Ingress,’ ‘Pokémon Go’ and ‘Harry Potter: Wizards Unite.’”

The company recently announced its new Niantic Creator Program and its Beyond Reality Fund, which will open up the platform to developers around the world to help achieve their vision in creating location-based and AR experiences. “… Access to this new collaborative architecture between Niantic and Qualcomm Technologies is expected to be provided to creators via the Niantic Creator Program when available,” said Keslin. “We’re looking forward to helping move the entire AR industry forward as we work together with Qualcomm Technologies to define a true end-to-end architecture – [including] hardware, software and cloud technologies.”