Entertainment technology company, Wave announced that esteemed DJ and producer Jauz will premiere his major headlining tour, “Dangerous Waters” Jan. 8 with a live-streamed virtual concert (a “Wave”) that will bring fans around the world together in a thrilling underwater experience. During his performance, Jauz will be interacting as an avatar and engaging directly with fans, including gaming experiences that will have attendees interacting with underwater visuals as the show happens.

Fans can tune into the show by visiting Jauz’s official Twitch and YouTube channels. Those with VR headsets can attend the show via Wave’s VR and PC desktop apps, which support Steam for HTC Vive, Oculus Rift and Windows Mixed Reality. 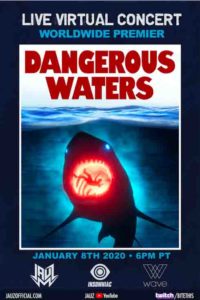 During the Wave, Jauz will use key features of the platform to engage directly with fans, while debuting a few surprises that can be expected from his upcoming tour, which kicks off Jan. 18. The visuals are inspired by Jauz’s longtime respect and affinity for: sharks.
Those attending via Jauz’s YouTube and Twitch channels will have access to exclusive, interactive moments including the option to game play with the underwater visuals as the show happens.

“An underwater concert is the kind of mind-blowing world that virtual concerts empower. This Wave will be absolutely stunning – showcasing what’s possible with game engine graphics and the creative drive to perform for fans in a totally interactive way,” said Adam Arrigo, co-founder and CEO, Wave. “Jauz is a gamer who lives on sites like Twitch, so he’s designed his Wave to embrace this live audience connection. We will see you in Dangerous Waters in the new year!”

As an active participant on Twitch, Jauz has partnered with Twitch and Discord to host monthly “Demo Roulette” series this year, where he live streams monthly via his Twitch channel to give viewers the chance to co-produce a song together. For each episode of the series, Jauz selects a demo and works with the aspiring producer on his stream, letting fans watch the creative process.