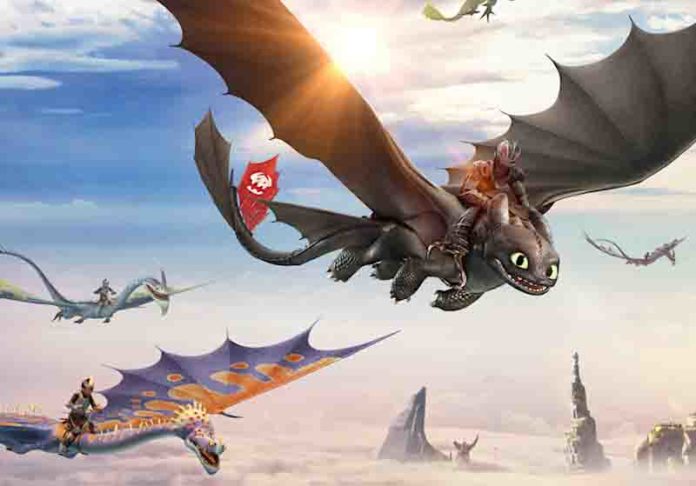 In “DreamWorks Dragons Flight Academy,” a class of up to eight rookie riders at a time is enlisted in the world’s first dragons flight academy led by famed dragon riders, Hiccup and Astrid, and their loyal dragons, Toothless and Stormfly, as they embark on a swooping, swerving free-flying rescue mission to the Hidden World.

Since the public opening of Dreamscape’s Westfield Century City location in December 2018, the company has welcomed sold out crowds, enthusiastic reviews, and repeat visitors on a consistent basis, proving that audiences can’t get enough of Dreamscape’s approach to immersive storytelling.

“At Dreamscape, our goal is to create the ultimate immersive experiences that allow our customers to enter into, and in this case fly into, worlds that they never dreamed possible,” said, Dreamscape chairman and producer of the VR experience Walter Parkes. “In working with DreamWorks Animation’s How to Train Your Dragon film trilogy, we are turning the audiences into the star of their own movie adventure. No longer are audiences just watching Hiccup and Toothless take on a group of ruthless poachers, but now, audiences can fly alongside them on their very own dragons as they protect the Isle of Berk. We are excited to introduce audiences to this unprecedented full sensory experience of becoming a dragon rider.”

The adventure kicks off at Berk, a village featured in the films that teeters high on the cliff tops of a rugged North Sea island and is home to fierce Vikings and every known species of dragon. In Berk, Dragons and Vikings live together in playful harmony, but poachers pose a constant threat. After mastering their dragon riding skills, the eight rookie riders must band together to complete a perilous rescue mission in the Hidden World, dodging flaming arrows and collapsing ice caverns along the way. In order to earn their dragon wings and become true heroes, the rookie riders must escape as a team unscathed, showing the value of collaboration and teamwork.

For more information or to purchase tickets, visit dreamscapeimmersive.com.